Swimming with wild dolphins was definitely our highlight of the Mauritius trip! Therefore, this topic just needs an own blog post!

There are many providers for dolphin tours and also the hotels offers this tours. Since I have already heard and read that there are big price and quality differences in the tours, I informed myself detailed in advance. During my research I came across the private tours of Vitamin Sea, which we booked (no cooperation).

Our tour with Vitamin Sea Mauritius

We decided for the 3-hour dolphin tour, in which a total of three spots are approached:

The day started early in the morning at 6 a.m. when we met Cedric at the harbor on the west coast. We had a rental car for this day as we wanted to explore the islands for a while, but you can also book a transfer directly with Vitamin Sea. Taxis and buses are hard to get before sunrise, so take care early for you ride to get there. 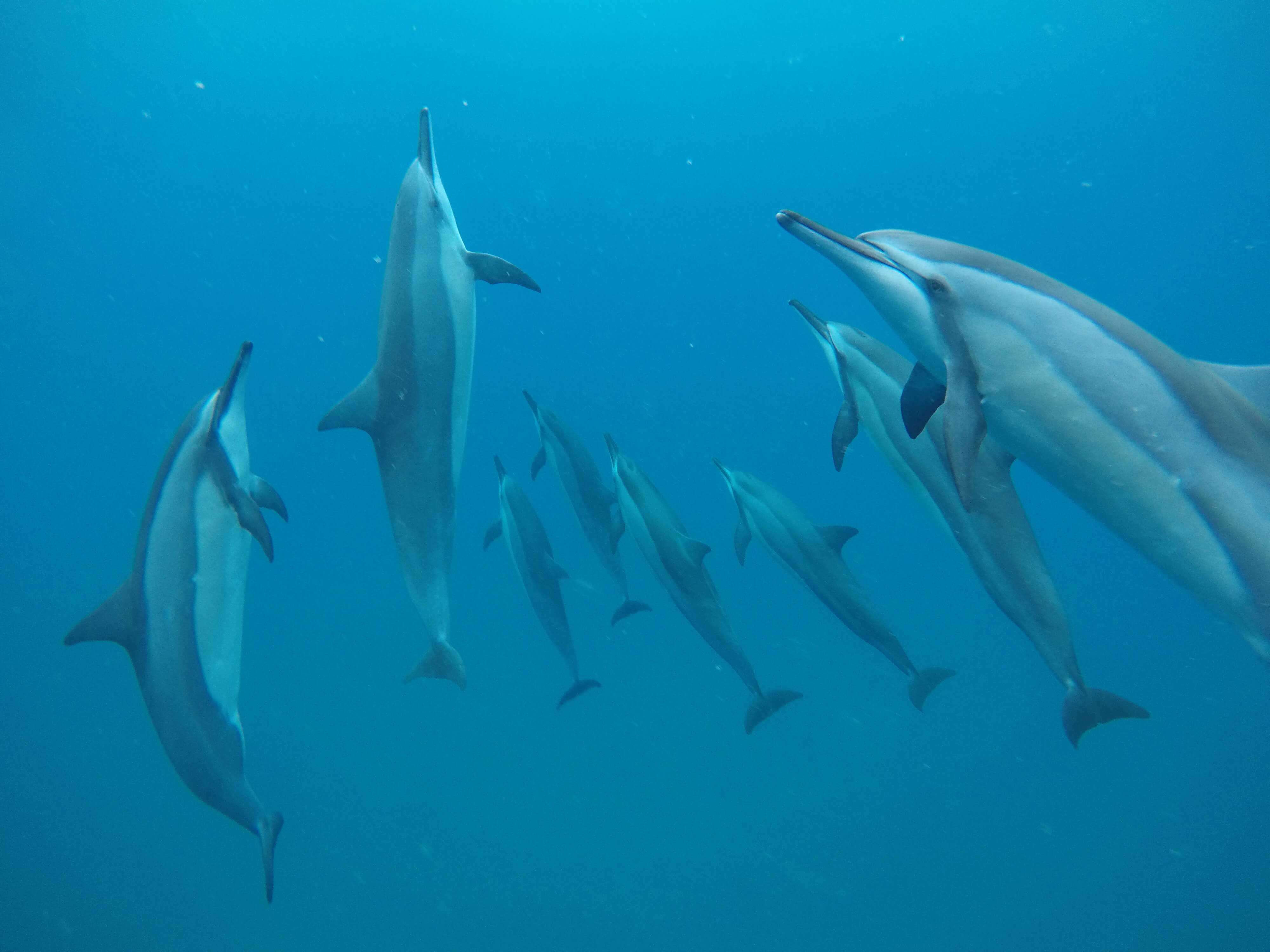 Since Mauritius is almost completely surrounded by a reef, we first had to go out on the open sea for a few minutes to get through the reef. The dolphins logically stay out of the reefs 🙂 Then we went into a bay and after a short time we have seen the first dorsal fins on the water. This moment was just amazing! I have never seen this beautiful animals in the nature and I was just overwhelmed.

There are usually two types of dolphins in the bay: bottlenose dolphins and spinner dolphins. But you only meet one kind, rarely both at the same time. The bottlenose dolphins are mostly in small groups of 5-6 dolphins, we had the great luck to meet the spinner dolphins, which are always in large groups of 20-60 dolphins. I once tried to count “our” group and have lost the overview at number 30. There were so many dolphins! I uploaded a video that shows you almost all dolphins at the same time – how many dolphins can you count? 🙂

But let’s get back to our tour: So we found the dolphins and watched them from the boat. As you know it from the TV, they actually swam in the bow wave of the boat and we even could hear the sounds above the water! We watched the dolphins for a while and then got ready to swim.

Our guide Cedric got in the water first, hold on to the border of the boat and observed the behavior of the animals underwater. You should know that the dolphins always take a short breath on the water surface and then disappear deep underwater for several minutes. So if you go into the water right when you see the dolphins on the surface, they are already gone before you are there and as a “normal” human you are not as fast as them. Therefore, our tour was so great because Cedric stopped the boat whenever he saw that the dolphins will reappear and sent us into the water then. So we have always swum in the middle of a whole group of dolphins, which cam up and down with us. It was absolutely amazing and the dolphins were so close!

When the dolphins disappeared deep below us, we got back on the boat. Cedric watched again underwater where the animals swim and then brought us back into the water. Overall, we did that 5-6 times and were over 1.5 hours with the dolphins. I still get goose bumps and a smile on my face when I think about these moments! 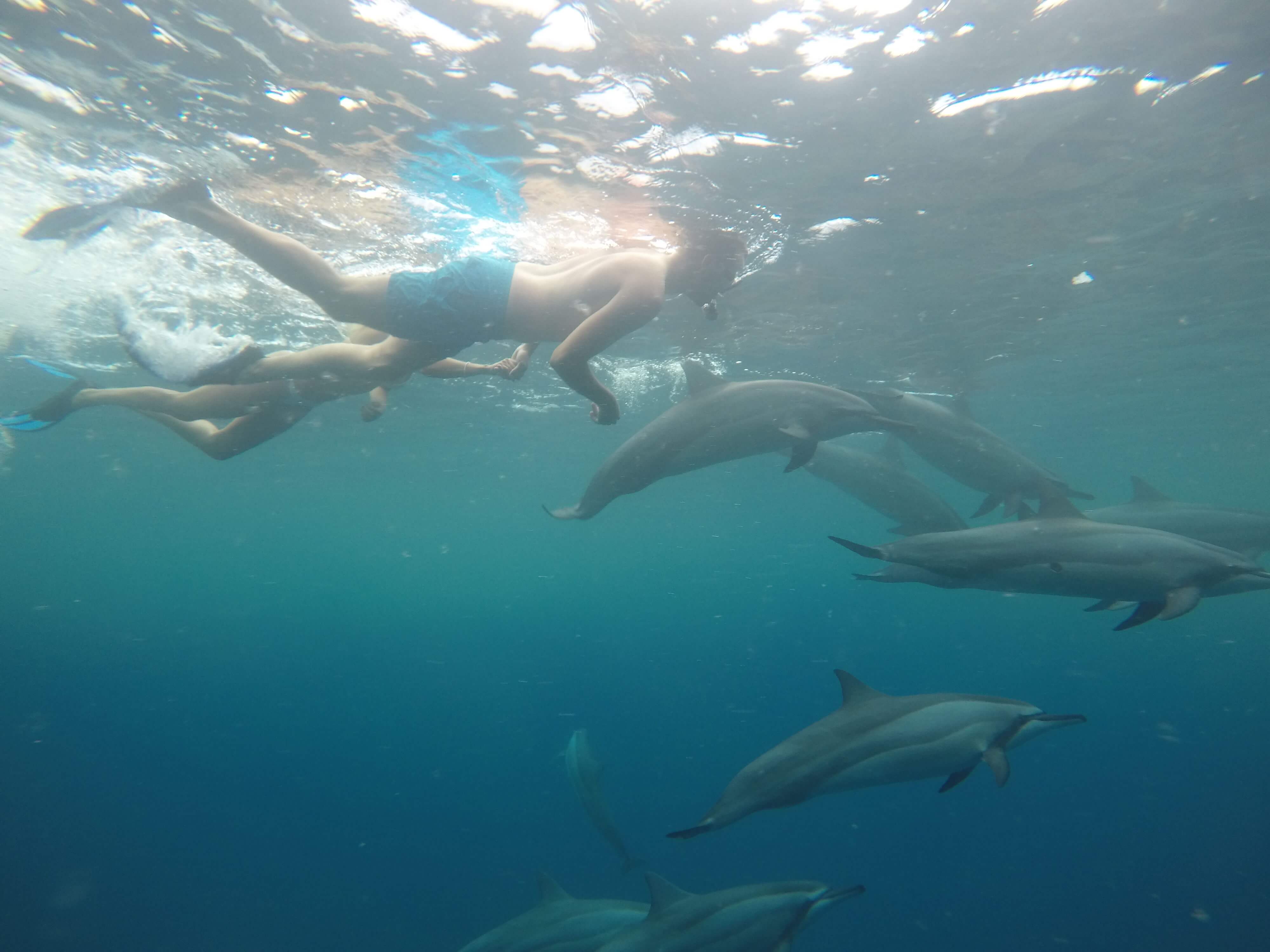 Around 8 a.m. we noticed that more and more boats came into the bay with tourists, who of course also wanted to go into the water. So I was really happy that we got up early and avoided this crowd.

I was often asked why we took for the more expensive tour because there are so many cheaper providers. But I think the points from above makes it clear 🙂 I’m so glad that I had the right feeling from the beginning and booked the tour with Vitamin Sea. By the way: for a small extra charge, Cedric takes great pictures and videos of you while you’re swimming with the dolphins!

After the experience with the dolphins we drove to Le Morne to snorkel in one of the most beautiful places. On the way there we were provided with snacks and drinks and Cedric has already shown us some pictures with the dolphins.

The snorkeling spot at Le Morne was really amazing! Coral and fishes in all colors and we have even seen real Nemos. For me that was all new and I could have been crying out of enthusiasm. Our guide also had bread which he threw into the water and suddenly there were hundreds of fish around us. Cedric took some pictures of us again.

On the way back to the harbor we stopped at the Crystal Rock. This rock is half in the water and consists partly of volcanic rock and partly of coral, really a great natural phenomenon! And as the name implies, the water there is especially clear! Unfortunately, we didn’t have such a good weather that day, which is why the water was not as nice as with sun, but the view was beautiful!

After a total of about 3 hours we were back at the harbor and since we started so early, it was only half past 10 so we had the whole day ahead.

One last tip: book your tour with Vitamin Sea early! The tours are often already booked out a few weeks in advance. 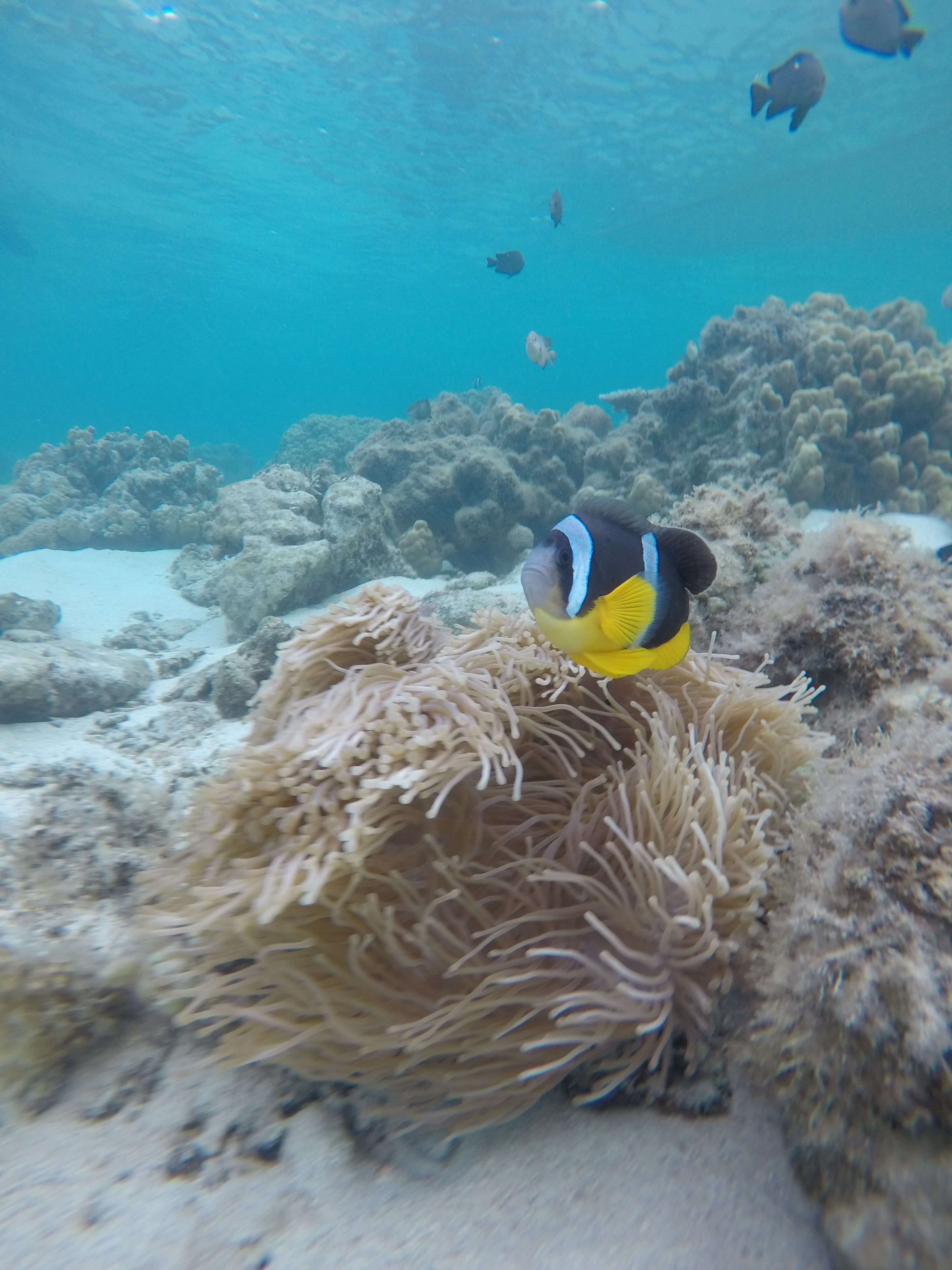 By the way here you will find the article with general information & travel tips for Mauritius, such as: the best travel time, entry, currency exchange, transportation and costs.

And here are to do’s in Mauritius.

This article contains ads, but this is NOT a collobartion!